For ages I've been walking past an empty, crumbling house wedged behind a false wall with blanked out windows.
It's a lonely survivor in a sea of hotels, offices, car parks and corporate construction, and on closer inspection I find out why:

Here, on 20th November, 1752, was born Thomas Chatterton, the young, tragic poet made famous in the Henry Wallis painting. 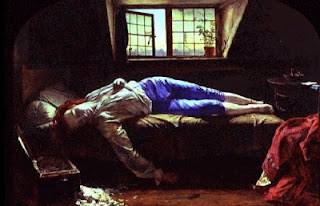 His story makes Les Miserables look like an episode of Glee.

Having failed to sell the publishing rights to a collection of 15th century poems by a Bristol monk (which Chatterton had actually penned in his mother's attic ) he attempted to pass himself off as a political satirist in London, with a similar lack of success.

Alone, penniless and starving, his dreams in tatters, he poisoned himself at the age of 17 in his lonely room surrounded by the torn up fragments of his friendless poems.

Those fragments still exist, saved from the landlady's broom by a Dr. Fry who had intended to sponsor Chatterton's genius, but who arrived just too late.

It's rather poignant then, that the birthplace of Bristol's most tragic romantic should now be empty, cold and ignored.

Someone, however, has placed a figure over the doorway.

Maybe it's a homage to the poet, or maybe it's just there to discourage felons; who knows...

Either way it's a gesture towards an old house that needs all the friends it can get. 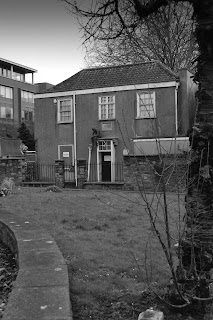 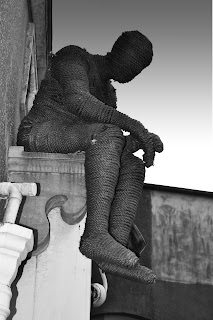 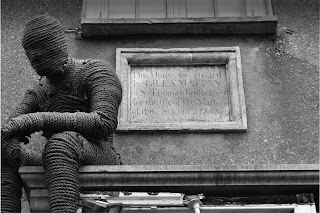 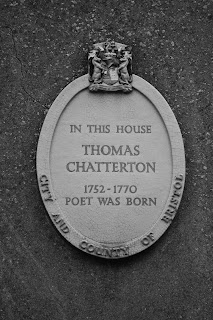